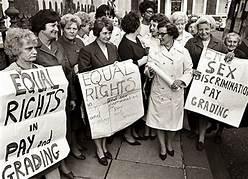 On International Women’s Day it is good to pause and reflect on the many rights that we, as women living in the UK, have and perhaps take for granted.  The rights (for many of us) to have freedom to marry who we want, to vote, to work, to drive, to own our own house, to have our own bank accounts.  I recognise that this isn’t the case for some women in the UK, perhaps because of their own personal circumstances or other reasons, however for the majority of us, we can feel fairly secure.

Let’s just wait a moment and take a look at the headlines around us:

As a woman, my life story has mostly been in a male dominated environment.  I was born in a male dominated household (Dad and 2 brothers and a male dog!) with just Mum and I to bring some sort of female balance.  After attending an all-female school, I joined the Women’s Royal Naval Service (WRNS) – again a male dominated world which in the 1980’s also meant experiencing sexual harassment and discrimination - but times were a-changing.  On leaving the WRNS, I served the next biggest part of my life in the Fire and Rescue Service advising on HR and equality.  Again, whilst times were changing, there was considerable disparity of pay and opportunities. I also was paid significantly less as a Head of Department than my male colleagues and, when I queried this, it soon became very apparent that I was not to question this but should feel grateful to have been appointed to such a role.

So, with some interesting life experiences behind me, I salute the amazing work of reformers who have gone before us.  I recognise, with some frustration, that there is more work to be done, but I do feel that in my profession I do have a voice and I should be challenging and encouraging clients and employers, friends and colleagues, to embrace equality in its fullness – in particular in the field of equal pay.

If you would like to discuss this with me then please contact me via my website, social media, phone or email.  I’d love to hear from you - thank you for reading.